Which one to choose between React and Angular? Well, to use Frameworks and libraries in a much more productive way, first we need to get to know its silent features and then its special benefits of using in the front-end development. But importantly, we need to select the one that best acknowledges your software requirements – both functional and non-functional.

The Historic Difference between React and Angular

In the software development field, both are web technology giants. Since their launch, they have gained immense popularity among the web developers. Angular is a front-end development framework developed by Google using TypeScript coding language. As a comprehensive suite, Angular has all the essential components required to develop swift web applications. Released in 2013, React is an innovative Library developed by Facebook stable finding its umpteen applications in developing Facebook projects. Building an app using React is easy. You need to integrate a pack of other supporting tools like containers, code bundlers, routers, transcompilers, app-testing utilities, state-management software etc. too with React. The basic difference between React and Angular is that the former is an open source JS library and the latter, a fully-featured MVC framework.

When we look closely into the functionality of these widely used platforms, we can see that Angular is the first choice for building SPAs - Single Page Application. Whereas talking about React, the platform is someone new in the family of innovative programming platforms. Its innovational approach can be evident in the “view” module residing in the MVC architecture - the Model View Controller architecture. As a ‘Superheroic JavaScript MVW Framework’, Angular is the newest and an extended version of Angular JS. To be noted, one of the recent projects from Google, Angular is used to code Google AdWords. According to the studies of HotFrameworks, AngularJS ranks globally in the 2nd most popular position pushing ASP.NET to the lower positions.

React is acknowledged by the name “JavaScript library for building user interfaces” and finds far more applications in Facebook projects. React is now continuing its reign in the software development industry with innovative features. React is a high-performing platform which is increasing its popularity day by day and studies show that React is currently used by 53% of software developers and a whopping 32% are planning to learn more about the platform.

However, both the technologies commonly top the list of Top 15 JavaScript Frameworks for the year 2019.

A brief technical difference between the two – Angular & React 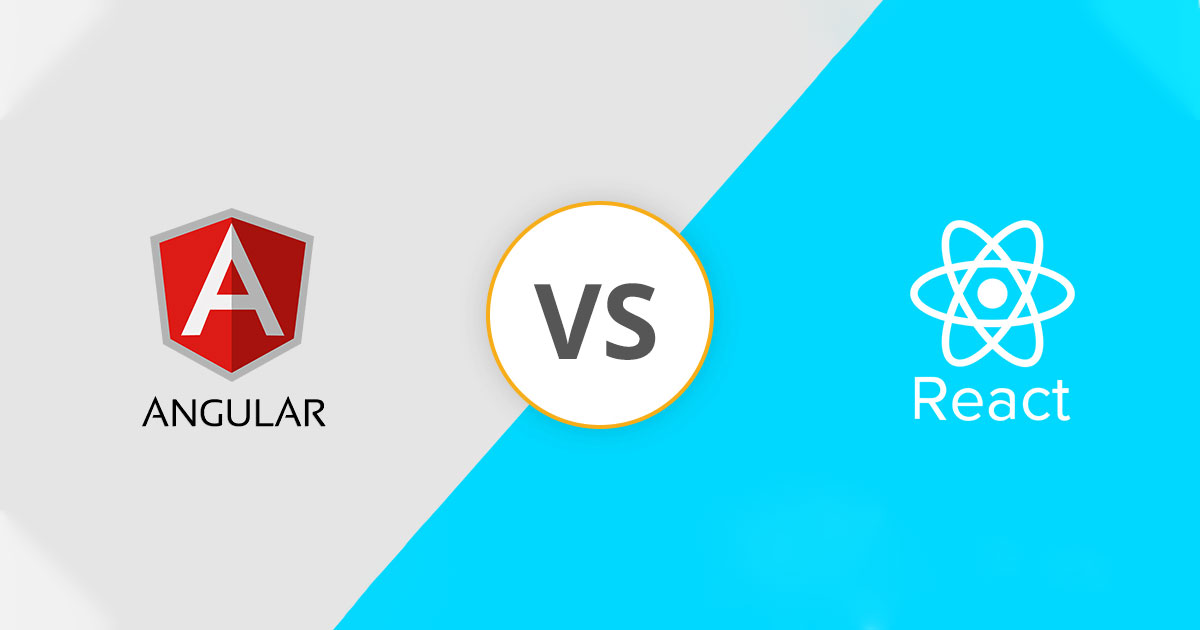 - React uses JavaScript as its programming language and Angular has Typescript in its place.

- App size of both React and Angular is relatively small.

- Document Object Model (DOM) of React is Virtual DOM and that of the Angular is the Real DOM.

- Rendering of both the platforms is on the client/server side.

- Angular has a complete set of strong abstractions to build complex projects and React has Medium level of Abstractions.

React and Angular: A technical comparison

Angular helps developers to come up with clean and error-free codes. The programming language of Angular is TypeScript, which itself is a superset of JavaScript. The main advantage of TypeScript programming language is that it ensures top-notch quality for the codes. And we know that cleaner programming codes are highly important in developing complex apps - both in web or mobile app development.

While comparing with React, the latest versions of Angular offer better Error handling. For example, Angular 7 incorporates the feature of upgraded error handling.

In the case of providing better user experiences, React is the best while comparing it with the Angular. The usage of virtual DOM enables React app developers to make the necessary update in accordance with the changes made by the users while developing enterprise applications. The other advantage of React is that it won't allow the update to affect other parts of the software interface.

When we talk about the time-saving efficiency of both the platforms, React allows app developers to reuse particular parts of the code or set of code components. As the code components are isolated and any updating can be done without affecting each other, the development of apps based on React platform provides enormous time-saving efficiencies for software developers.

React offer faster testing speed than that of Angular. The use of Redux reduces the hurdles of managing and testing of codes if they are complex or even dynamic in nature.

ReactJS implements unidirectional or one-way data binding. The main advantage of implementing unidirectional data binding is that if software developers make any changes in the child entities, it will not get reflected in the parent entity. This feature makes the code more stable and makes it easy for React app developers for maintaining the code in the future.

React is used by some of the leading technical giants like Facebook, Whatsapp, Uber, Airbnb, Netflix, Instagram, Dropbox and Angular is used by many fortune companies such as Google, Forbes, Nike, Upwork, HBO, General Motors, Sony, etc. Do you know what the core difference between React and Angular is? Angular is HTML – centric while React is JS-centric. And what makes React more popular is that React uses JSX, which is more simple, swift and robust while comparing with HTML.

React Vs Angular comparison: Advantages of Angular and React

Angular has incredible support from the global community. Software developers and designers make great contributions to this community which is responsible for its increased credibility and popularity in the industry.

Angular can run on any platform or any browser. In addition to this, React has a range of robust tools which is higher in number compared to React.

Two-way binding or Bidirectional data binding is one of the main attractions of Angular. The feature intelligently eliminates the effects of changes made by users in the app development.

The superset of JavaScript is TypeScript. Angular uses TypeScript as its programming language and is the one element that offers object-based programming components and static type checking.

The component-based architecture of Angular enables it to bind functionally similar components together. That is, the method of proper data encapsulation happens in Angular making it reusable and maintainable in the future.

Instead of JavaScript, React uses JSX for templating. The main advantage of using JSX is that it is type-safe and error handling is at its best with JSX. i.e, almost all type of errors are caught at the time of compilation. React – JSX is faster as it does optimization during its compile time.

Prompt rendering is one of the stunning features of React. It gives a competitive edge to React over other technologies like Angular.

Every new technology has its own drawbacks and cons. Angular is also not an exception. The main disadvantage of Angular is associated with its learning curve. The learning curve for Angular is steep. The second disadvantage is that of its complexity. To implement safety and high-security for apps build using Angular, software developers must take special attention.

When we try to compare the performance of both the platforms, Angular has some edge over React as React isn’t a full-scale framework. This drawback of React makes it give low performance compared to Angular. For software developers, it requires in-depth knowledge on the features of React for seamlessly integrating UI Library into Model-View-Controller (MVC) framework.

The two popular technologies are meant to solve the rising front-end challenges. The difference between the two lies in their philosophy and approach. Both the technologies will be here for a long time in the software development industry and it is your discretion to choose the best technology for your enterprise applications.