The modern era is loaded with technological advances, surprises, and inspirations. The latest technology in robotics points out a way by which, the robots get integrated with Artificial Intelligence (AI). The AI technology aids robots to recognize pain and to enhance self-repair in face of damages!

Innovation at its best!

For making it happen & researching robots about recognizing pain as well as self-repair, certain experiments got conducted culminating in interesting results! For instance, the scientists at Purdue University showcased that, a rectangular robot as tiny as the dimensions of a human hair can travel through a colon by performing back-flips! How cool is that?!!

Elsewhere, an international research team developed a new Artificial Intelligence (AI) based system by focusing on the brains of tiny animals. The novel AI system controls a vehicle with a certain few artificial neurons. The technological side of AI aids in coping with a better noisy input & the overall operation is quite simple.

Robots are nowadays used extensively in the medical (surgical) field for guiding instruments precisely onto certain body locations that aid in surgical benefits. This whole process takes place with the help of Artificial Intelligence (AI).

The global market for robots is expected to grow rapidly with a certain Compound Annual Growth Rate (CAGR). It grows into an in-comprehensible multi-million dollar business! Robots and Artificial Intelligence go hand-in-hand via brilliant integration. Scientists as well as researchers utilize this technology for developing mini-brains that recognize pain & aids with self-repair!

How does the system work?

The robotic systems used for research & experimentation has Artificial Intelligence (AI) enabled sensor nodes. These AI sensor nodes process as well as respond to pain that arises due to a certain level of pressure exerted via a physical force. Researchers showcased through experimentation that the robots get quite capable of detecting & repairing their damages during minor injuries; no human intervention is required, whatsoever!

Robots get designed with a network of integrated sensors that aids in generating or gathering information about their immediate environment. For instance, a factory robot working in an assembly line use vision to guide its arms to the right location & touch the right sensors for determining if the objects are slipping or not when picked up. Robots in today-world are prone to damages that require extensive maintenance & repair. 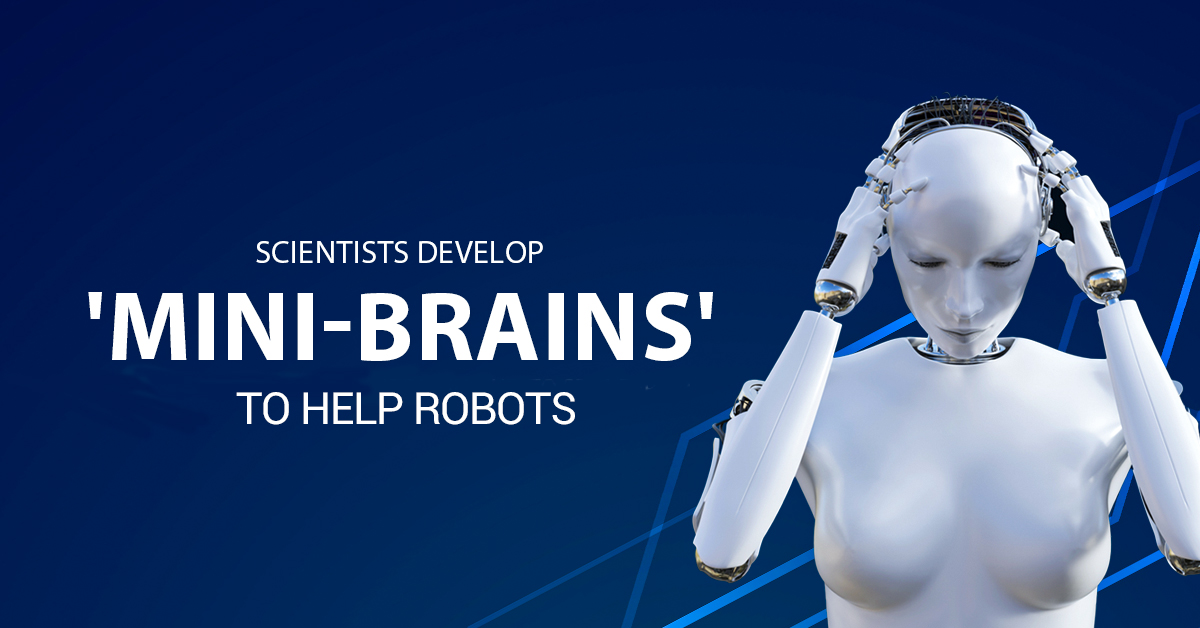 The new approach aids in embedding AI into a network of sensor nodes. These nodes get connected to multiple small, less-powerful, as well as processing units that act like mini-brains distributed onto a robotic skin. With mini-brains, learning happens locally while the wiring requirements and response time for robots get reduced five to ten times compared to conventional robots.

For robots to work with humans one day, a major concern is ensuring a safe interaction between both entities. To make this interaction work, scientists from around the world keep looking for ways of bringing a sense of awareness to robots. This sense of awareness includes feeling pain & reacting to it, and withstanding harsh operating conditions. The robotic systems are capable of processing information efficiently with minimal wiring as well as circuits; a wonderful feat indeed!

A plethora of sensors!

Sensors form the crux behind the way by which a robot works; a plethora of sensors define robots! The sensory network generates the right information with regards to its immediate environment. A disaster rescue robot uses camera and microphone sensors for locating survivors under debris and pulls them out with guidance from touch sensors on their arms. All information & data get sent to a single large and powerful Central Processing Unit where proper learning occurs.

Memtransistors, designed by a research team, helps robots to recognize pain & learn about several damaging stimuli and act accordingly. These memtransitors (memory transistors) are brain-like electronic devices that are capable of memory as well as information processing through artificial pain receptors & synapses. Upon getting inflicted with an injury, the robot quickly loses its mechanical function. The molecules in the self-healing ion gel begin to interact. This interaction results in the 'robot stitching its wound', which restores the normal mechanical functioning while maintaining high responsiveness.

According to researchers, the self-healing properties of novel devices help a robotic system to repeatedly stitch itself together when injured with cuts or scratches. Robotic systems are adept at mimicking a biological system. The robots survive and respond to mechanical damage while keeping up the good work in a continuous streamlined fashion; engaging effective work-ethics even through patching up of injuries! Smart robots - indeed!

The conventional robots carry out several tasks in a structured programmable manner. The latest robotic technology enables them through perceiving of environment, learning, and adapting accordingly. In this era, most researchers focus on designing more sensitive sensors while not focusing on challenges such as, how they can make decisions effectively. Such research is a necessity for the next generation of robots for interacting actively with humans. New fabrication methods are introduced to robots for mimicking the human neurobiological functions. The findings have laid down important frameworks for this field; researchers tackle several challenges effectively, making the mini-brains a success!

Experiments enabled robots to be robust as it learned how to deal with injuries in real-time. Robots became capable of responding to pressure even after damages, which demonstrated robustness in the robotic system. Robots become more accustomed to survival by responding to mechanical damages arising from minor injuries that include scratches & bumps. This system contributes to savings in maintenance, which would benefit cost-cutting while keeping the robots intact!

This latest technology is related to the field of neurobiotics, which is a combined study of neuroscience, robotics, and artificial intelligence. It is related to embodied autonomous neural systems that include brain-networks, and biological systems. The neural systems get embodied inside machines with the mechanic as well as other forms of physical actuation.

A robotic framework gets designed with neural networks integrated into it. The basic idea behind neurobiotics: Brain embedded in the body, which has a connection with the natural environment. Through neurobiotics, several inspired theories get tested in a grounded environment along with a physical implementation.

The neurobiotics models are plenty & form a base with which a robot gets designed. There are several categories, which are as follows:

One another class of robots associated with 'mini-brains' is biological robots. They get inspired by the real-world yet are not neurologically inspired AI systems; an actual neuron gets wired to a robot. These are designed using a neural culture raised over the multi-electrode array (MEA) that records neural activity & tissue simulation.

This technology refers to the simulation of human intelligence in various machines. In a way, these machines are programmed to modulate & mimic actions just like it having a brain! AI machines exhibit traits that get associated with learning and problem solving as well.

An ideal characteristic of Artificial Intelligence includes the ability to rationalize while taking appropriate actions thereby having the best chance for achieving a particular goal. This novel technology works wonders with gadgets & other facilities that require exploration via research and experimentation. Scientists get to work on this technology to fine-tune the future of communication with various gadgets that get used in day-to-day life.

The concept of mini-brains

Mini-brain is a beautiful marriage between any kind of robot with a robust Artificial Intelligence (AI) technology. Apt neural networks get integrated into robots along with AI as well. Thus, mini-brains get designed and constructed with the idea of learning more about the grey areas of the human brain as well as its artificial counterpart, which gets fitted onto a robotic head!

To help robots evolve into an advanced species, scientists now utilize mini-brains. With the aid of mini-brains, experiments get conducted for enhancing their learning capacities and the consequent reaction to certain actions, damages, or injuries. Ample practice helps the mini-brains to understand an injury with which there is a loss of function & subsequent healing process using an ion gel. This practice helps robots to stitch together a mechanical abrasion with ion gels & get back to their business like nothing ever happened to them.

Mini-brains and experimentation on the same entity shed light on ways by which robotic, as well as Artificial Intelligence (AI) technology, evolves into something useful, unique, and inspiring like never before.