Nokia has won a NASA contract worth $14.1 to set up 4G network on Lunar surface


According to NASA Administrator Jim Bridenstine, the Space agency must quickly develop new technologies to realize the goal of astronauts working at a lunar base by 2028. Further, he emphasized the importance of having a habitation capability on the surface of the moon in a recent live broadcast. However, Nokia's research arm intends for developing a network for streaming video, navigation, and wireless operation of lunar rovers. NASA has recently awarded $14.1 million to Nokia of the US to assist them in deploying a 4G cellular network on the moon. The grant is meant to advance development and research for space exploration. Also, this grant is part of contracts worth $370 million that were signed under NASA's "Tipping Point" selections.

The outcomes to be expected from the deal with Nokia include technologies starting with 4G/LTE and evolving to 5G. The company is also encouraging pioneering innovations that will facilitate the building and deployment of the first wireless network on the moon. The main goals of this technology include the streaming of high definition video from the lunar surface, real-time navigation over lunar geography, and the control of lunar rovers. Network developed by Nokia with partner Intel Intuitive Machines will act as a critical communications fabric that facilities the proper working of data transmission applications.

The network developed by Nokia will be capable of withstanding the vacuum conditions of space, extreme temperature as well as radiation. The mission-critical LTE network will also withstand the sizable vibrational impact during landing and launch on the surface of the moon. Apart from that the fully integrated cellular network will meet the stringent power, weight, and size constraints of space payloads in the smallest possible form factor. However, this is not the first attempt made by Nokia to launch an LTE network on the moon. An attempt was planned in the year 2018 in collaboration with Vodafone UK and PTScientists, which is a German space company. The plan was to launch an LTE network at the site of the Apollo 17 landing. Unfortunately, this mission never got off the ground.

Nokia's mission of deploying a 4G cellular network will validate the future potential for human habitation on the moon as well as other operational deployments. To develop a range of new technologies, NASA has selected 14 American companies as partners. These companies also include several small businesses that will work together and help to forge a path to develop sustainable Artemis operations on the lunar surface by the end of this decade. Nokia's Bell Labs announced that they are very excited to have been named by NASA as a key partner. Besides, the company announced that it will pave the way for a sustainable human presence on the lunar surface.

The Bell Labs of Nokia will utilize its pioneering innovations to deploy as well as build the first end-to-end, space-hardened, low-power, ultra-compact LTE solution on the lunar surface in late 2022. Apart from this, Nokia is planning to partner with Intuitive Machines. Together, these companies will be working towards the mission to integrate this groundbreaking network technology into their lunar lander. The network will successfully establish the first LTE communications system on the lunar surface. Moreover, this network will self-configure upon deployment.

LTE/4G technology of Nokia promises the revolutionizing of the lunar surface communications by successfully delivering reliable as well as high data rates while efficiently containing size, power, and cost. The Artemis program of NASA will be establishing a sustainable presence on the lunar surface by the end of the decade. Communications will be one of the most crucial components of Artemis program of NASA. Nokia is now developing innovative technologies and working with NASA to build the first ever cellular network on the Moon.

The LTE network of Nokia is the precursor to 5G. This LTE network of Nokia is ideally suited for facilitating wireless connectivity for all activities that astronauts need to carry out. For instance, this network enables control of sensor and robotic payloads, deployment, biometric data exchange, telemetry, voice, and video communications capabilities. 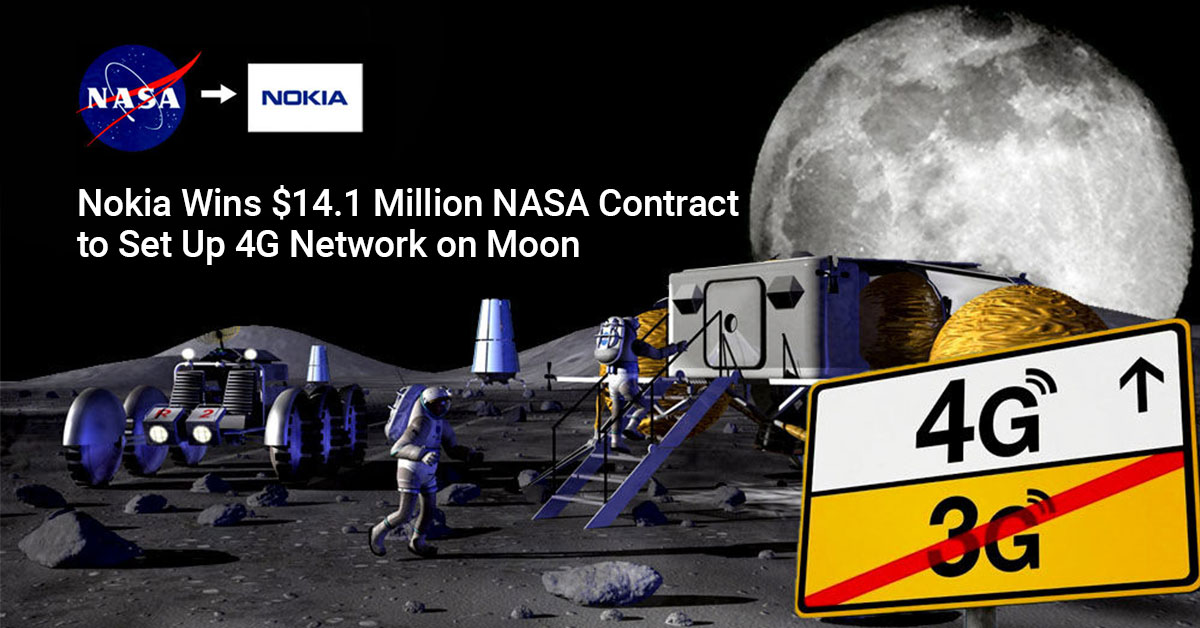 Nokia Bell Labs President and Chief Technology Officer at Nokia, Marcus Weldon, said the company will be leveraging its rich and successful history in space technologies to achieve this mission of deploying a 4G cellular network on the moon. Over the past few years, the company was successful in discovering the cosmic microwave background radiation that was produced by the Big Bang. Apart from that the company also pioneered satellite communication. Now, the renowned firm of Nokia is building the first-ever cellular communications network on the lunar surface. The high-capacity, resilient, and reliable communications networks developed by Nokia will act as a key to supporting sustainable human presence on the moon.

The lunar network of Nokia will consist of LTE Base Station with high-reliability operations and maintenance (O&M) control software, RF antennas, LTE User Equipment, and integrated Evolvenar launch as well as lunar landing. Furthermore, this network is designed to operate in the extreme conditions of space without any failure. The fully integrated cellular network meets the power constraints of space payloads in an extremely compact form factor. The company is doing this by successfully developing the first high-performance wireless network solution on the lunar surface. The Nokia Bell Labs will initially develop a 4G network on the lunar surface and then eventually shift it to a 5G network. Nokia's (NOK) Bell Labs is planning on developing a 4G/LTE network now. The giant cell towers having radios and large and power generators will support the deployment of the 4G network on the Earth. The small cell technology developed by Bell Labs uses lesser power than the conventional cell towers and is more limited in range. Currently, this small cell technology by Nokia is deployed for 5G networks across the world.

Nokia creates and delivers the technology to connect the world. Driven by the award-winning Nokia Bell Labs and with a commitment to innovation, Nokia is now a leader in the development as well as deployment of 5G networks. Apart from that, the company provides a comprehensive portfolio of software, network equipment, services, and licensing opportunities across the globe. With an efficient set of radio networks, the communications service provider customers of Nokia support more than 6.4 billion subscriptions. Further, the enterprise customers of Nokia have deployed over 1,300 industrial networks worldwide. Nokia transforms how people work, live, and communicate. The company also adheres to the highest ethical standards.

The same LTE technologies of Nokia have successfully met the voice needs for the last decade and the world's need for mobile data. Moreover, these technologies are well suited to provide state-of-the-art and mission-critical communications and connectivity capabilities for any future space expedition. LTE has a large ecosystem of components and technology suppliers. This proven commercial technology is deployed worldwide. The standards-based fourth-generation cellular technology, particularly commercial off-the-shelf communications technologies (4G Long Term Evolution (LTE)) are proven reliable, scalable, easily deployable, robust, and mature. Nokia is now planning to pursue space applications of the successor technology of LTE, 5G. Moreover, the company will develop technology to expand the commercialization of LTE and supply commercial LTE products. NASA is now seeking industry-developed space technologies through the Tipping Point solicitation.

Space Technology Mission Directorate of NASA fosters the development of commercial space capabilities. The public-private partnerships will benefit future NASA missions. Besides, they shepherd the development of critical space technologies and combine resources of NASA with industry contributions. Leveraging innovations for the Artemis program of NASA will help to establish sustainable operations on the Moon. Being a market leader in end-to-end communication technologies Nokia provides and develops mission-critical networks adopted by first-responders, airports, industries, factories, and the harshest mining operations on Earth. Nokia also offers networks for reliable communications, automation, and data collection. Nokia Bell Labs will further optimize their networks for future terrestrial as well as space applications. Apart from that, the firm will validate the performance of the solution and the technology readiness level in the most extreme environments. The network deployed by Nokia will be supporting lunar surface communications at more reliability and improved speeds than the current standards.

NASA announced that the network developed by Nokia will be the first LTE/4G communications system in space. This 4G network on the lunar surface will support navigation and wireless operations of lunar rovers. Bell Labs plans to work jointly with Intuitive Machines, a spaceflight engineering firm, to develop the 4G network. The 4G network of Nokia will be efficient as well as compact. Apart from that, it would be designed to withstand radiation in space, extreme temperature, and vacuum conditions. NASA has announced in a live broadcast that the network developed by Nokia would extend to spacecraft and will help to develop technology fit for the moon. This project will support NASA's goal of having a lunar base on the moon by 2028 even though there were no details about the timeline of this project becoming a reality.