The initial version of Angular referred to as Angular.JS got released in 2010 as a JavaScript-based open-source front-end web framework. The main goal of Angular involved making the development of single page web applications easier. A complete overhaul or rewrite went into Angular by the time the second version of it got released.

As is known, Angular.JS forms a structural framework for various dynamic web apps. The Angular.JS uses HTML as a template language, which let its syntax to express various components of applications with clarity. Angular.JS is known for excellent data binding and dependency injection, which eliminate unnecessary code. All these happen within a browser making it easy to work with servers.

One framework for mobile & desktop

Angular:A developmental platform for building & designing mobile as well as desktop web applications with the use of TypeScript/JavaScript.

Unit Testing: Understanding what is unit testing & why it should be taken care of?

In this ongoing discussion, the focus lies in unit testing: what it is and why it matters so much? Automation helps in the cause of unit testing and its power should not be under-estimated! As a matter of fact, the software developers do make a genuine living out of it! Automation gets applied to make all kinds of processes more efficient. It is wonderful to use automation to make software development processes much easier & more efficient. Technologies & processes such as Continuous Integration, DevOps as well as similar becoming commonplace. Software testing manifests itself in the form of automated testing or automation processes.

It is a known fact that automated testing becomes essential for the modern software development process. Testing applications manually is slower & error-prone than that of the automation processes.

The software might be susceptible to regressions all-around. Whenever there is an application change, it could inadvertently cause harm to the code-base. A high degree of confidence gets achieved during an application release when it is re-tested after each, and every change regardless of how small it might be. Thus automated testing becomes a necessity rather than a manual one.

Due to the fear of software regression, the software developers become skeptical about touching & altering any codes. A code-change, no matter how small & insignificant it is, causes an unintended consequence, and hence the rational thing to do is for making very few changes; as low as possible. In the long run, this results in a sharp decline in quality with regards to the code-base. The software developers might not feel encouraged to work on things that are unimportant.

Let's look into the core of our discussion. It's wonderful to walk through some of the main tools used in the testing of the Angular applications. These tools are categorized into three groups. First of these are the test frameworks, the second category would-be runners, and finally we wrap-up with miscellaneous tools. So, what are we waiting for? Let's do it!

Let's start with Mocha; the first tool. Mocha is a JavaScript Testing Framework. It runs on Node.js and the browser. Mocha makes asynchronous testing easy; one of its major strengths.

Siesta is a UI testing as well as a unit testing tool. It gets written as a generic testing tool in JavaScript. The testing tool Siesta is able to test both Node.js processes along with web pages. One major benefit of Siesta includes it is being supportive of major browsers. It does support headless environments via Puppeteer & headless WebDriver.

Karma forms a test runner for JavaScript and gets used along with Jasmine as default for Angular. Since Karma is a testing framework agnostic, it doesn't have the right qualities to replace Jasmine. It is designed for offering simple integration with tools such as Jenkins or Travis, which allow integration with a CI pipeline seamlessly. With Karma, it becomes easier to control the workflow both from the terminal or IDE (Integrated Development Environment).

Angular Mocks is a unit test expert in Namespace from angular.mocks.js code. Isolating the unit code from Angular 5 helps with a smooth testing process. Angular mock has an injecting method by which Angular dependencies get injected.

Browserify reduces coding between files, which helps with the bundling of all dependencies before testing. A utility referred to as Library Lodash help Browserify in providing consistency, customization, and performance. With the JavaScript extension, Browserify is easy to work with.

A stand-alone test for JavaScript, Sion works without any dependencies. Any unit testing gets worked upon by Sion. In unit tests, you get to mock the directive & controller dependencies for checking on functions, which are being called by arguments using a stubbing and mocking library. 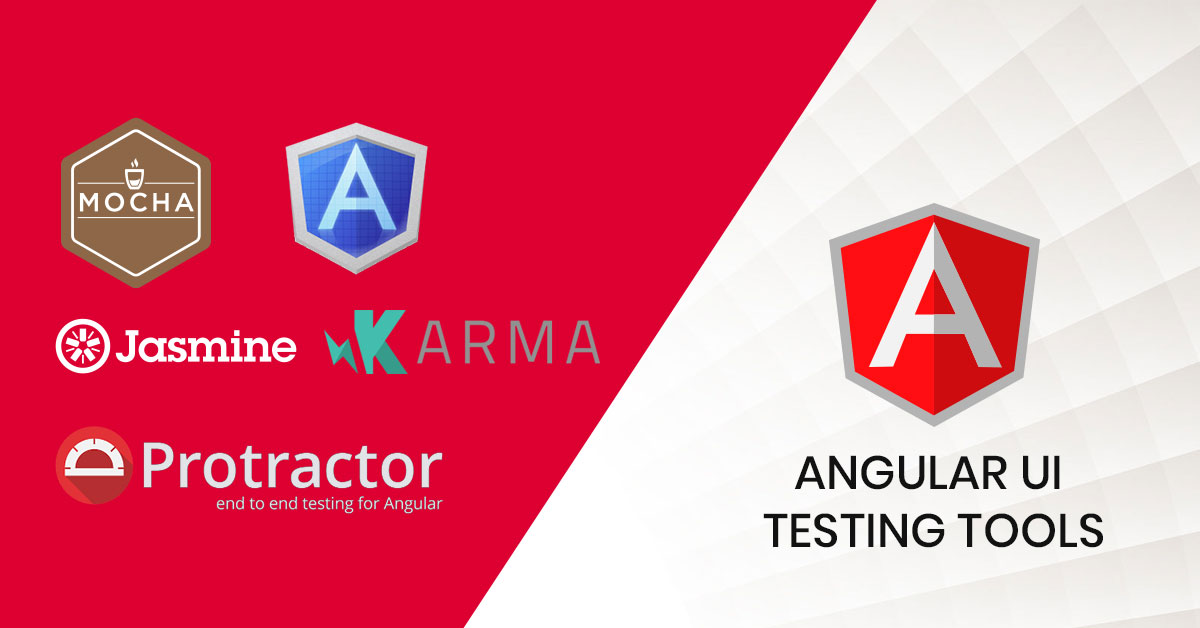 Earlier, we looked into some regulation Angular UI & unit testing tools. They have certain properties that make them stand-out and the best among the rest. Now, let's discuss a bit about the miscellaneous tools that help with Angular UI testing. Upon closer examination, we get to know that these tools are neither test framework nor test runners. Yet, these are good enough to be Angular unit testing or UI testing tools.

Mocking tools form another important component for a great unit testing strategy. The true unit tests don't have external dependencies & so, mocks are good counterparts that help simulate the dependencies. Angular with Jasmine is a good example; the feature is referred to as the Spies.

Factors to concentrate on while using the right testing tools

A perspective about an ideal API (Application Programming Interface) design needs to be known: Design Aid.

All codes implemented needs to be properly documented: Documentation.

Every feature needs to be tested after any changes from the client-side server in case of continuous data change: Quality.

Broken builds not deployed for production gets ensured by the automatic quality tool: Constant Aid.

Keen observations and researches show that in recent years, the unit testing popularity has sky-rocketed. Progress is being made even though the ideal scenario of every developer unit testing their code is not happening at this point in time.

Automation & automated tests have become the norm these days, which has eliminated all the errors that come with manual testing. Many developers have started writing unit test tests along with the production codes.

An important trend includes the explosion in the number of JavaScript frameworks. New frameworks get created and released in the blink of an eye. Only two frameworks compete for being the best on top of the pyramid, which includes Angular, and React.

In this discussion, Angular and its tools came under observation as specifically it was talked about tools for UI & unit testing. Most of the experienced & expert developers usually think in terms of Jasmine, and Karma.

The discussion clearly showcases that these are not the only two tools out there when it comes to Angular UI testing. Tools that compete with Jasmine & karma got mentioned as well as discussed in this article. The technical blog also covers certain additional miscellaneous tools, which aren't tested frameworks or runners. These are important pieces that work well in this unit testing puzzle.

So, read through it & be informed over the Angular UI testing tools that work wonders with your automated unit tests.