Visual Studio Features vs. VS Code

The Microsoft Visual Studio includes a code editor that supports IntelliSense, a code-completion component as well as Code Refactoring. An integrated debugger works well as a source-level as well as a machine-level debugger. Various built-in tools include a code-profiler, designer for developing GUI (Graphical User Interface) applications, web designer, class designer, and a database-schema designer.

The Microsoft Visual Studio accepts plug-ins, which expand all functionalities at every level. These include adding support for source-control systems such as Subversion & Git along with involving new toolsets like editors and visual designers for domain-specific languages. Toolsets for various other aspects of the Software Development Cycle like Azure DevOps get used via the Microsoft Visual Studio.

The Microsoft Visual Studio project file stores any changes that get made in the IDE (Integrated Development Environment). These project files are referred to as MSBuild files and are compiled at the Command line. This process gets done through MSBuild by integrating the build command in an apt script or a CI system. These form the main crux behind the usage of Visual Studio for all uses. 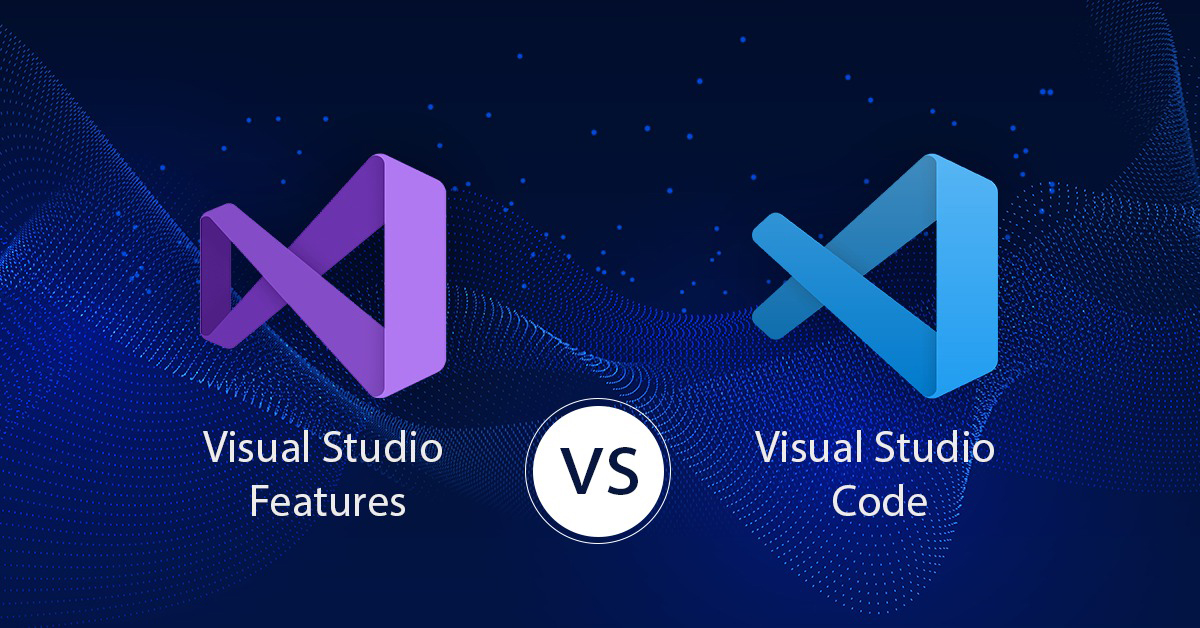 VS Code or Visual Studio Code is a free source-code editor designed & developed by Microsoft for Windows, Linux, and macOS. The Microsoft VS Code features support intelligent code completion, syntax highlighting, debugging, code refactoring, snippets, as well as an embedded Git. The VS code users get to change the themes, keyboard shortcuts, several preferences while installing extensions that add any additional functionalities.

The source-code editor gets used with a variety of programming languages such as Java, JavaScript, Go, Node.js, and C++. Visual Studio Code is based on the Electron framework that is useful in developing Node.js web applications, which runs on a Blink Layout Engine. Microsoft Visual Studio Code employs the same editor component that is used in Azure DevOps.

Microsoft Visual Studio gets predominantly used for several project systems. The Visual Studio Code gets used for opening one or more directories. This process helps the VS Code to operate as a language-agnostic code editor for any type of language. As observed, VS Code supports several programming languages & the set of features differ per language. All unwanted files & folders get excluded from a project tree via the provided settings.

VS Code gets extended through various extensions that are available through a central repository. The central repository includes additions to editor & language support. A notable feature includes an ability for creating extensions, which add relevant support for new languages, themes, and debuggers. VS Code performs static code analysis while adding code liners with the help of a Language Server Protocol.

Microsoft Visual Studio Code comprises of multiple extensions for FTP (File Transfer Protocol). This process allows the software to be used as a free alternative for web development. The designed code gets synced between the editor & server without downloading any extra software.

Visual Studio Code helps users to set code pages in which active documents get saved. This gets done with the newline character & the programming language, which allows it to be used on any known platform in any locale for any given programming language.

As far as data collection goes, Visual Studio Code collects the usage data for sending it to Microsoft with an option for disabling this process. The telemetry cable is accessible to the public. All the data gets shared with Microsoft-controlled affiliates and subsidiaries.

Source control is one of the best built-in features of Visual Studio Code. The version control gets provided with a dedicated tab inside a menu bar from where settings get accessed. This option allows the users for creating repositories while making push-and-pull requests directly from a VS Code program. All this information forms a brief idea about the Visual Studio Code or VS Code!

Visual Studio Features vs. VS Code

The work-style determines if you want to use Microsoft Visual Studio or VS Code. Visual Studio is highly complete whereas the VS Code is configurable. Language support, work-style & version control helps in determining what to use or choosing between both. VS Code usually starts up quickly enough that helps with a jump-start with your work! It needs a monthly update with many extensions to be taken care of in the process! VS Code takes much less time than Microsoft Visual Studio for rebuilding any symbol tables needed for any large C++ project.

Although it seems easy to decide between the Microsoft Visual Studio for any given software development task, it's not! VS Code gets configured to be quite close with an Integrated Development Environment (IDE) for many programming languages. This configuring process comes with a number of trade-offs.

Microsoft Visual Studio works well with databases that include Microsoft SQL Server. As seen before, VS Code comes with a lot of database extensions. Visual Studio gets great refactoring support while the VS Code implements refactoring operations in half-a-dozen programming languages.

VS Code is popular among the data science community and the workload offers a lot of features. The Microsoft Visual Studio does not run on Linux. The VS Code runs on Linux, which makes it easier to work with. Visual Studio for Windows gets designed with a Linux/C++ workload as well as Azure Support.

Microsoft Visual Studio facilitates accurate coding. Live coding assistance gets provided to users through visual Integrated Development Environment (IDE) regardless of the programming language they utilize to code. It comes with quick debugging, rigorous testing, team collaboration as well as other customization options.

Advantages of Microsoft VS Code

Microsoft VS Code comes with certain unique features that include support for multiple programming languages along with cross-platform support. The biggest & most useful feature of Microsoft VS Code is IntelliSense as it detects any code snippets that are left incomplete. The VS Code comes with numerous extensions & support and this does not slow down the actual process. It comes with a repository and good web support.

The Microsoft VS Code is designed with a well-planned hierarchy structure with code-files located in various files & folders. Code snippets get used for improving the overall imprint of codes and the "improving code" function prompts the user about any necessary changes as suggested options. It also provides terminal support to the users along with a way to engage with multiple projects in very little time effectively. The VS Code comes with Git Support as well and provides a "commenting" feature for reviews & feedbacks.

In this discussion, we looked upon the various features used by both Microsoft Visual Studio as well as VS Code. Use this information and choose your tool wisely. So, what are you waiting for?