At the time, DevOps seemed like an obvious answer. Regardless of what software-operations-department thought & worked on, they built APIs (Application Programming Interfaces) that software-developers used; albeit with the whole process moving too slowly!

To deal with the issues they were facing, Dynatrace built a new cloud-based on its SaaS offering. This cloud turned out to be completely self-healing and it completely alleviated the need for software-operations personnel in the software-production department.

Achieving a One-Hour Code to Production: Not Easy!

Dynatrace dedicated three years to shrinking its one-day (24 hours) code-to-production window to a single hour! People were sceptical about the whole process but still, Dynatrace kept at it! The dedication of Dynatrace came-to-fore through increasing their dynamic work-force by more than double; for instance 200 to 470 for this enterprising/interesting project work!

The software-operations proved to be the biggest bottleneck; a reason for Dynatrace to move-on & attempt at NoOps in the first-place. The R&D team gets referred to as an Autonomous Cloud Enablement Team; the self-healing concept gets understood easily!

Dynatrace brings in new innovations to software technology: A visualization device built by one of their architects that advertise software-errors in the cafeteria & other prominent places. This genius technology helps in providing the software-engineers with immediate feedback they can see & feel. So, if any error gets displayed/appears, they fix it, pronto! As they say, it's all about continuous delivery & feedback. Feedback is very important for Dynatrace to keep themselves on top of their software-projects!

Of course, the Customers freaked out!

Dynatrace finally developed NoOps through evolution from DevOps and told their customers about it. Well, they freaked out real good! There is a common misconception that Dynatrace would have to alienate customers in order for NoOps to work. However, this is the exact opposite! Although through NoOps you sell only operations, it works well only with the same amount of customers & some more; Dynatrace is essentially developing more modern services as well as digital transformation. As far as the customers are concerned: although the idea is novel & interesting, they just don't know how it's possible; a clear-cut win for Dynatrace in this regard: DevOps to NoOps.

Eventually, customers flocked in by asking how it works. In response, Dynatrace built a practice and blueprints for the entire procedure. For bringing in the DevOps or NoOps culture, all software-silos need to be taken-apart from the top-down. A successful implementation requires transferring people from operations to development. Also, a successful DevOps or autonomous cloud enablement practice does not work-out well without an executive buy-in! With these concepts in mind, customers can now adapt to NoOps from DevOps seamlessly easily and be happy about it. Thus eventually, Dynatrace did replace DevOps with NoOps within a space of three years; incredible isn't it!

Now, let's have a look into the evolution of NoOps from DevOps with help from modern technological innovations.

DevOps, an approach to software development, got widely established over a period of 8 to 9 years. As observed, bringing in the software development & IT operations together brought many benefits: better communication & increased collaboration. A range of new tools & disciplines emerged from a support of the movement.

DevOps & AIOps form two areas that gained considerable momentum in the industry according to Gartner's Hype Cycle for Performance Analysis. DevOps is the beginning stage of a much bigger business-critical journey towards a more automated future. The automation gets done via AIOps, and ultimately NoOps. IT environment is becoming automated in a way that, it is not even necessary to employ a dedicated team for managing various tasks.

It is of no doubt that, reshaping the cultures & various mindsets around an IT enterprise as well as DevOps does not get done overnight. Many new ways & approaches toward automated IT are not ignored in favour of maintaining a status quo. IT enterprises that don't make an adjustment to cloud-based, AI-driven automated IT, and fail to improve/upgrade their DevOps efforts in direction of AIOps and NoOps will get quickly left behind by technological innovations on a rise. 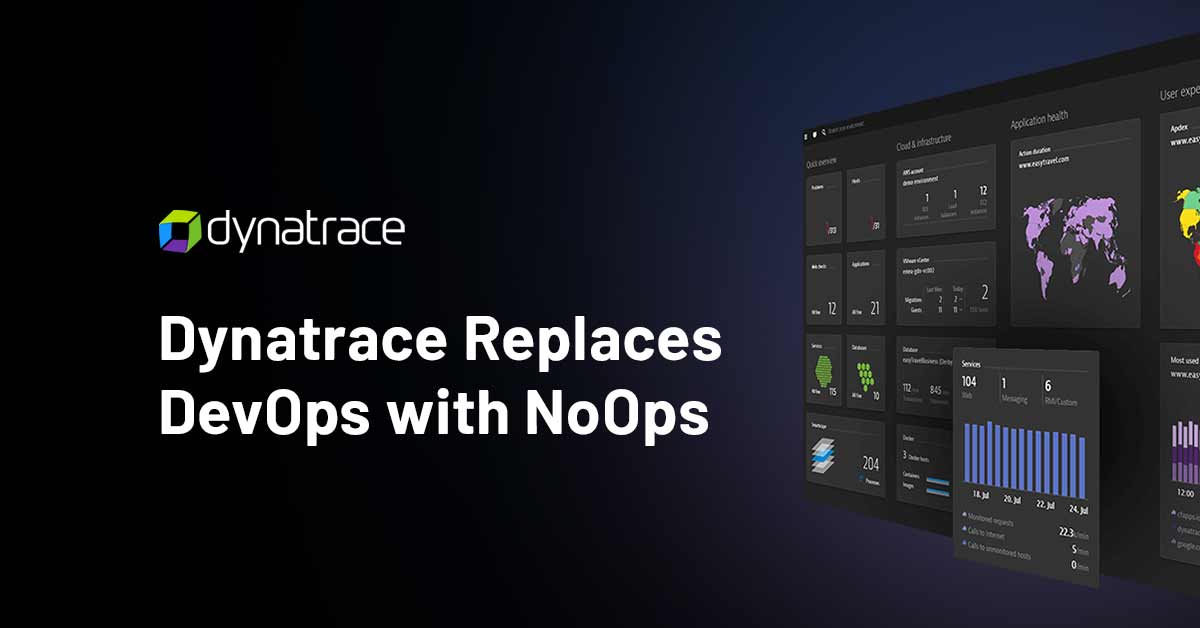 The scaling of DevOps with AI-powered monitoring is regarded as a successful path from DevOps to NoOps. It is a known fact that DevOps positively transform various individual delivery teams with fast feedback loops across a software-development-pipeline. This process achieves speed, quality, enthusiasm, & excitement.

In the case of DevOps, its success spreads across different teams in a company. For scaling purposes, most companies choose Cloud Technology. Each service team has a pipeline that uses different technologies & releases software at various frequencies. The cloud helps in managing costs efficiently with agility & speed. Also, the benefit of choosing one's own stack does create a technology disruption.

Successfully scaling DevOps with the software industry's only AI-powered application monitoring gets done by Dynatrace. The company/firm Dynatrace transcends challenges that people struggle with while managing these complex and hyper-dynamic web-scale applications. Dynatrace works with one agent, Ai-based quality gates, AI alerts as well as work/life balance ops teams. Thus, Dynatrace replaces DevOps with NoOps easily thereby empowering an organization to move smoothly from CI/CD to DevOps and bridge the gap between DevOps & a hybrid-to-native NoOps.

Shift Quality to the Left

Quality directly influences the production process as customers look for a good-quality program or service that eases their work-load/time! It is a known fact that DevOps need to duplicate quality in the developmental stage for ensuring that what the team deploys each day remains at the same quality-level as present in the in-production software. This process gets referred to as "shift-left".

The software-development teams add self-diagnostic & self-healing strategies into their own codes for defining how monitoring & alerting looks like!

Essential to incorporate the right tooling

DevOps does need automation for making quick changes when an issue gets spotted. It is definitely not ideal to wait for an hour for deploying a new code change. Also, not at all practical to wait for weeks until the next release. This is where automation tools come in and enable teams to push out changes with a safety net (no manual touches). This expedites the whole process even more.

Zero-friction & reduction of busy-work for DevOps teams form your goals and hence, part of the NoOps gets included in managed services. The outsourcing of various operations infrastructure management removes the burden from an IT team. This lets them focus on growing the business. Here, the operations still exist and are no longer burdened entirely on any of the internal teams.

Use Cloud Services in a Smart Way

Cloud platforms have an aura & appeal around them with the ability to scale up and down on demand. This process appeals to both developers as well as enterprises alike. Automation of this process enabled NoOps in the IT enterprise. The adopters of cloud technology get often surprised by the costs of storing data & moving it between cloud-environments. All businesses need to carefully choose their cloud-compatriots if they are support the modern innovative technology of NoOps evolved from DevOps.

DevOps does need ample management support for understanding the true value of customers. They are definitely important from a business perspective as they ensure all applications' high availability.

The truth might lie somewhere between a real future of operations and the world of NoOps. It is no doubt that NoOps is an Intelligent-Ops in the sense that the whole software managing operations are AI-based. The software does collaborate with people who exercise superior intelligence & creativity where it is due/critically required.

The whole software-operations get seen by Intelligent-Ops while machines take-over all the pattern-recognition as well as response duties. Meanwhile, the humans figure out all the tough cases & develop operation strategies and objectives. Thus, with NoOps, the Intelligent-Ops tools do become a personal intelligent assistant.

All these were made possible by Dynatrace, a software intelligence company that replaced DevOps with NoOps in around three years with the help of AI-automation processes.