Accelerating your AI tasks has always been simpler with GPUs. Everyone among the billion windows 10 users worldwide has agreed to this too. Modern-day GPUs have grown themselves much from that of a mere graphic device. They now operate as a parallel computing fabric which gives desktop PCs ease to complete their tasks which was earlier the sole purview of supercomputers only. They also are capable of learning modern machine learning tasks and also compute to effectively build neural networks along with supporting the model building and processing different tasks.

What is a GPU?

After the introduction, GPUs have been named as one of the most important types of computing technology which is issued not only for personal but also for business computing. It has been designed mainly for parallel processing and is also used in a variety of applications which includes video rendering and also graphics. They have shown their prominent place among the gaming zones along with showing their capability in handling creative production and AI ( Artificial Intelligence)

While making their entry into the world of computing GPU's were introduced as they were designed to accelerate renderings which included 3D graphics. By the course of time developments happened which made them more programmable and flexible which allowed programmers to introduce and create more effects and realistic scenes with advanced techniques of shadowing and lighting. It also enhanced the ability to accelerate workloads in high-performance computing, deep learning, and many more.

One of the most important applications of GPU includes Artificial intelligence and Machine learning. Because of their superlative capability of having a great amount of computation capability, they help in delivering extra acceleration in workload which takes advantage of their highly parallel nature like recognition of images. Majority of today's deep learning techniques we see rely upon GPU's which are working in conjunction with CPUs. 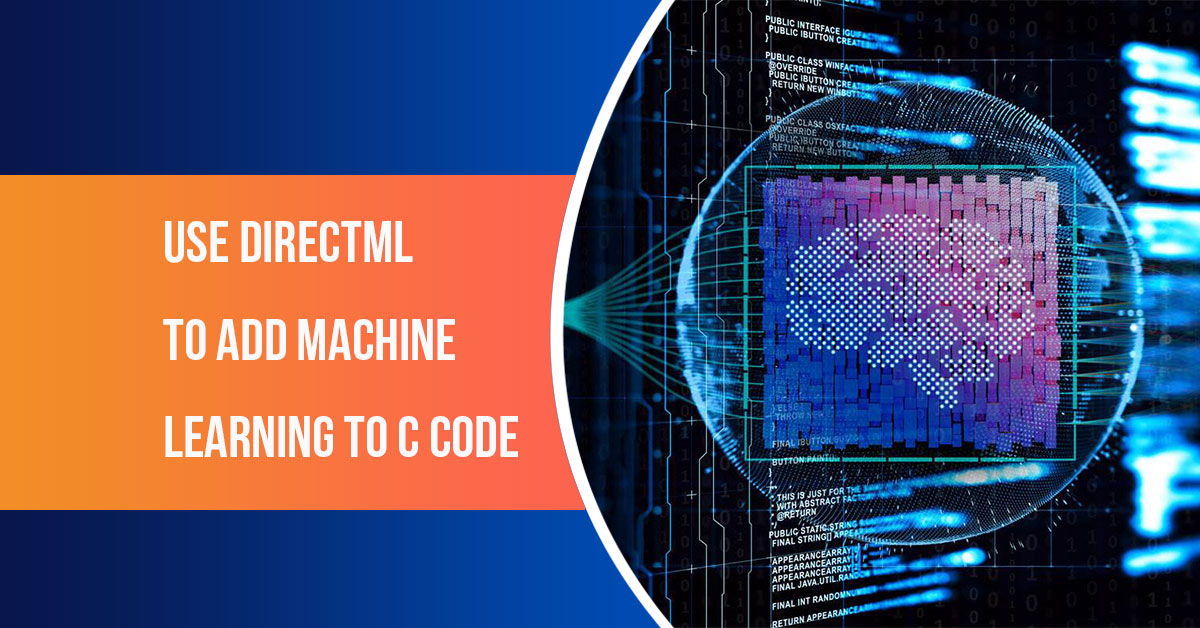 "How can a machine without life act like a human in any case ?"

"They are machines with minimal impact in our lives and wouldn't be helpful to us and can cause harm in the long run."

Some common questions and anxieties of people all around while we first got introduced to the system of computers.

How far this has gone now?

If we start from the bottom, we make use of basic decision trees to work with artificial neural networks which solely depends on the task you're trying to get done and also the amount and type of data that is available. This is how we imply this in applications that can be helpful in various fields including medical diagnostics to automatic cars.

DirectML or Direct Machine learning is a base-level application program interface for machine learning. Operators are the building blocks of DirectML. (The term operator is used for Hardware-accelerated machine learning primitives.) Thes are the basic building block that consistently helps you I developing machine learning techniques such as anti-aliasing, upscaling and style transfer. It also helps in achieving impressive effects with fewer rays per pixel with the help of denoising and also super-resolution.

The machine learning interference workloads can be integrated into your middleware, backend, or any application of the kind. The peculiarity of DirectML is that it has got a familiar DirectX 12 style interface of programming and workflow which is equally supported in every hardware that is compatible with DirectX 12.

DirectX is a component under the umbrella of Windows Machine learning. It is perfectly useful in games and engines which typically need a lower level of abstractions along with high-level developer control which in turn helps you in taking full advantage of the silicon. If your needs include counting milliseconds and squeezing time frames, DirectML is the perfect choice to meet your machine learning needs to the maximum. In comparison with WinML, DirectML can give you a real-time high performance with low latency and works very well in resource-constrained scenarios. DirectML can be easily integrated directly into your rendering pipeline or even your existing engine. Also

if we take the case of high-level custom machine learning frameworks, DirectML can be served as a high-performance backend for windows.

By efficiently executing the individual layers of the interference model in GPU where each layer is treated as an operator, DirectML provides you with a base level, hardware-accelerated machine learning primitive operators. They will be having hardware and architecture-specific optimizations carefully designed into them. The operators' library in DirectML helps in supplying all the usual operations that you expect to be able to use in a machine learning workload.

DirectML which is a new package of Microsoft Al is designed to work with different types of instruments which primarily deal as an inferencing device to your functions. Over the past few times, Microsoft has been trying to simplify GPU programming with its various innovations. They started with DirectX GPU initially through Direct 3D graphics tools and then as the next step they extend it to GPU compute with Direct Compute. Lately, they have developed tools that help to map OpenGL calls to Direct 3D which is related to work building a graphical layer onto a virtual machine system bundled with Windows 10 of WSL 2 Linux. Similar t the stand-alone API and library, this is also supported by the Lobe ML labeling and mannequin growth device. It also has got a personal low-level ONNX implementation, besides, to help for TensorFlow.

The first thing to be noted while starting to work with DirectML and Microsoft AI, you must be using DirectX 12 compatible software. This is not a big issue since most of the trendy GPU's available in the market now match these criteria which makes it simpler for you to find one that specifically matches your funds. After obtaining supporting hardware as the next step you can arrange a growth setting using the Home windows 10 SDL. In the next step, you can include the DirectML libraries too into your machine learning tasks. A brand new major upgrade to the previous release of DirectML is their redistributable library. This not only makes the DirectML code simpler to incorporate within your functions but also provides 44 brand new operators which are defined as the new feature level of DirectML. One important thing to be noted is that, by separating it from the DirectX SDK's, you'll now be able to standardize on a single version of the platform you use by ensuring that the change which is now made to DirectX and also your windows updates wouldn't be affecting your other applications.

As far as Microsoft is concerned, they have been working throughout to split its monolithic SDK's apart which allows the users how to choose about when and how to update them. This can be helpful while two or more different versions of DirectML are running on your system at the same time. . Sometimes updates from Windows 10's semiannual schedules are also being allowed by the system. The thing to be noted is that this is not only limited to DirectML but it is also the basis of the work on WinUI 3.0 and Project reunion which do the same for UI components.

There are a lot of sample C++ codes available in the GitHub repository of DirectML which starts with basic Hello world code. You have to know about constructing the appropriate operators for the underlying Direct3D and DirectX shaders while using DirectMl data types even when you are using the new library. There can be cases where the resources can limit you which forces you to work as low a level as possible. As an example, we can say if you are building machine learning models into cameras or using them in applications requiring complex rendering, upscaling, or even noise-cleaning from feeds. This makes it important that Microsoft and developers have support for the fundamental building blocks like DirectML in certain ways that will make it easy to underpin the higher-level tools.

DirectML is one thing that acts as an important bridge between high-level machine learning tools and building machine learning in CUDA or OpenCL. Similar to the rest of DirectX, it is a powerful and complex tool that requires utmost care while in operation. By treating the options well ahead and with the introduction of new options it seems that Microsoft's tired approach to machine learning application development has marked all the right boxes intact.