2021, the information age has already eyed a whole lot of technological advancements. In this epoch, our lives are getting more and more simple with the evolution of technology. In this pandemic-hit world, a lion’s share of people, who are swaddled at homes are gifted with the opportunity to get connected with the world through screens. Such beautiful interactions are made possible with the evolution of technology. There are several top technology trends are unveiled for making the best of your time, out of which 9 new technology trends for 2021 are presented here. By getting acquainted with all these 9 trends will for sure make you sophisticated both in your career and also in your blithe life. 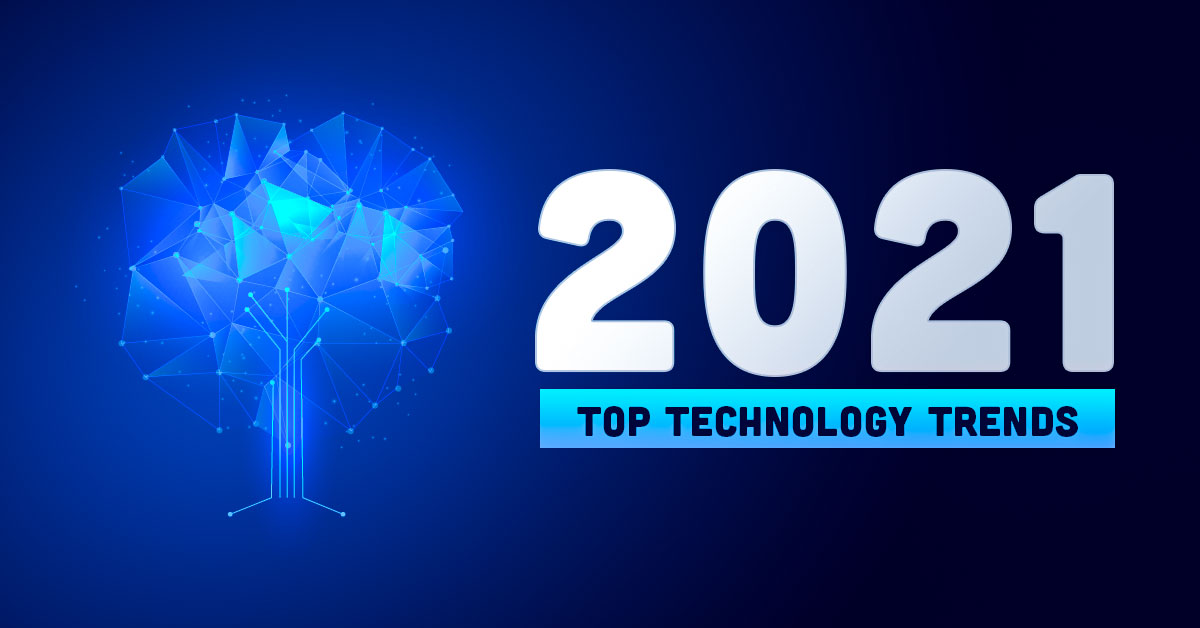 Machine Learning a very significant innovation of this decade is surprisingly a part of Artificial Intelligence. Being the division of Artificial Intelligence, Machine Learning too has its place in every industry. It even generates job opportunities for skilled people, as with this smart trend individuals can acquire jobs like robot monitoring, data analysis, web-based program development, and content curation. All these jobs are so fascinating and people are ready to crave for them.

Edge Computing is the IT architecture that facilitates both mobile computing and Internet of Things. Edge Computing processes data and also optimizes internet devices and web-based applications. Edge Computing is extremely useful and it is frequently employed by the servers and clients, as it lessens the need for long distance communication along with which Edge Computing minimizes latency and bandwidth usage. With the introduction of Edge Computing, Cloud Computing, which was once called as the rapidly evolving technology, took sidestep, as with Edge Computing time lag became an old story. Although, once Cloud Computing reigned in company with Amazon Web Services, Microsoft Azure and Google Cloud Platform, the chief players in the market. Later, it got abandoned by the players because of its drawbacks including latency. Edge Computing took its reins as it is able to process, data that are time-sensitive, data that are in far-off locations with restricted connectivity. And not least of all, Internet of Things, which is the very latest big thing is getting raised by the Edge Computing.

The type of figuring that mainly centers around evolving computer technology, with the principles of quantum theory as its base. Quantum mechanics is the phenomena that is equipped in Quantum Computing for performing computations in solving certain problems. The problems and calculations done will be based on the probability of an object’s state before it is calculated. This is a very innovative trend as with Quantum Computing, data can be analyzed in spite of the source. Being a subset of quantum information science, it possess an evident chance to get expanded to the field of data security. One must be well-versed with quantum mechanics, linear algebra, machine learning, and information theory for excelling in the field of Quantum Computing.

The super popular trend embraced in this decade in Virtual Reality and Augmented Reality. This user-focused technologies have already launched a sharp change in this world. With this extended technology, the user’s setting will get enhanced and he or she can even get immersed in the setting. However, this creative and immersive technology is mainly employed for redefining the world of gaming but still, it has been used by Navy, Army and Coast Guard for providing training with Virtual Ship. The process of teaching and learning also have been improved with the employment of AR and VR in the educational field. The extended technology is becoming fashionable in the world with its promising features. Howbeit, both AR and VR technologies are in their embryonic phase but still the technologies are very popular and are reining the world with their alluring properties. A lot of innovative aspects together with experiments are waiting at the door for the extended technology which will certainly leads to innumerable growth opportunities.

Blockchain system is the type of technology that is used for recording data and information, where such details can be just add but can never be altered, hacked or took away. Here, data will be arranged and organized as if in a chain. This is definite digital ledger, which does not provide any space for cheating and thereby offers enough safety and security. The introduction of cryptocurrency and Bitcoin has made the technology of Blockchain system popular. This is also referred as a consensus-driven technology, where there is no provision for any person or organization to be in charge of the data and there will be never a third party to control it. It has been already embraced by several industries and because of which the requirement for proficient developers of Blockchain technology has increased. The jobs based on Blockchain system demands expertise in programming languages, basic knowledge of OOPS, flat and relational databases, data structures, networking and web application development.

The Internet of Things, is the next big thing that is going to reign the world. It encloses a wide variety of elements in it. It simply means the connection of billions of physical devices around the globe through internet. Each and every sectors and industries are certainly getting transformed with Internet of Things , as it is re-exploring them. Internet of Things is shaping the face of every sector with greater connectivity and definite functionality. It enhance the zones by merging the physical and virtual world together, thus create the coziness of a connected experience.

The applications of Internet of Things in the physical world includes, tracking using devices linked to mobile phones, monitoring home doors, switching applications, predicting failure of devices and much more. Although, it is still at its embryonic phase, Internet of Things is evolving at a quick pace. For better career advancement in jobs based on Internet of Things, one should be an expert in Artificial Intelligence and Machine Learning, information security and data analytics.

Fifth Generation technology or 5G technology is the new iteration of cellular technology. Being skillfully modified, it can increase the speed and alertness of wireless networks significantly. With the employment of data-driven services together with the increase of bandwidth, 5G is enabled to transform the online world. It is even focusing on transfiguring the virtual interactions by incorporating Augmented Reality and Virtual Reality. Fifth Generation technology has its application in industries for monitoring and reforming functions. It even has its relevance in road safety, execution of rules, smart grid control etc. Because of its better performance and enhanced efficacy, telecom industries all over the globe are brushing up on generating the Fifth Generation services and its devices.

Although, cybersecurity is not at all a new technology trend but still being a rapidly improving practice, it can be added up under the title of new technology trend. As the technologies are getting upgraded each day, the measures and practices of cybersecurity is also getting evolved. Cybersecurity is what protects networks, systems, programs and also data from all sort of digital attacks including cyber threats, hacking tries. Cybersecurity assures every users with safety and security by enhancing the protocols against malevolent digital attacks. Data, being the most precious thing today, always possess the chance to get carried off and it is so imperative to take appropriate steps for protecting it from the cyber criminals. Careers based on cybersecurity are very much sough-after than any other technology related jobs and it includes jobs like ethical hacker, security engineer, Chief Security Officer.

Being, a pandemic-hit year, 2021 has already made the best use of all these 9 technology trends. With its furthermost impact in 2021, these 9 new technology trends are all set to get upgraded in the coming years in company with quite a lot of spanking new technologies. It is better for everyone, who are cocooned indoors, to pace up with the technological advancements. As such a drive will for sure present healthier career options together with which you can achieve your very special goals. So, don’t wait to get your talents sharpened and to hold close the technology for an exciting future.